Ste'phanie Portal contaced me about three months ago regarding a magazine article she was writing for a special issue, called Pratique des Arts.  She asked for some info on YUPO as well as a picture or two - if I was interested.  WOW!

After typing up many of the things that are exciting to me regarding my journey with this wonderfully slick and brilliantly colorful surface, I sent it all to her, and this is what she published.  She featured three of my paintings, Amazing Grates (pictured above George James,) Liquid Gold (Venice,) and Can You Hear Me Now? The eight page article includes six 'yupo' artists, including George James, the absolute King of YUPO. 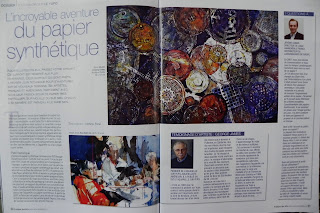 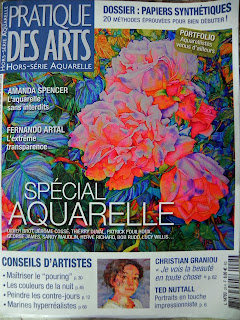 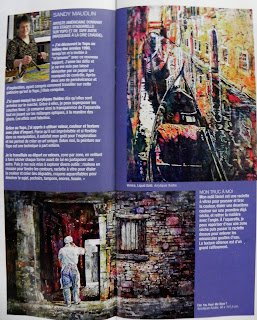 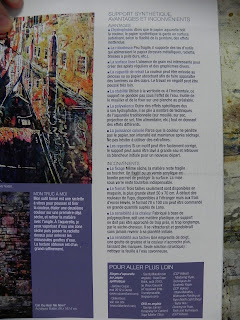 Since everything is in French, I'm waiting on Bonnie to translate it for me.  (I did much better with Spanish than French in school.)  Marianne got three magazines for me from her daughter-in-law in Paris, and I wanted to show it off.  I'm popping proud to be in such good company in this special watercolor issue - Ted Nuttall, Amanda Spencer, Charles Reid, George James!  Oh, and my name is even on the front cover!  What an unexpected thrill!  (I promise to quit bragging soon.)  Fellow artists Kaaren Oreck and Carrie Waller also have beautiful paintings featured in this issue.

There's even mention of my upcoming French workshop in August in Frayssinet, France, featuring my methods of batik and the French landscape.  (More info very soon about that.)  Thanks so much, Ste'phanie, for kindly including me.  And Happy New Year, everyone.
Posted by Sandy Maudlin at 5:28 PM

Congratulations! This is quite an honor and it's great to see your work garnering international attention!! What a great 2012 this will be for you!

Wow is right and you have every reason to BRAG big time. I am totally in awe!

Am I right, Sandy, that you favor fluid Acrylics on Yupo?
Or do you use wc?

Can't wait for you to blog more about your French workshop/trip coming up...batik? That is SUCH a complicated process! That is one workshop I would like to take from you some day.

Thanks, Dawn and Rhonda.

Ginny,I use both on YUPO employing several different techniques. Hopefully I'll be teachng a workshop in your area one of these days. The batik workshop will not involve wax at all, just various masking tapes and watercolor paper and yupo. It's not as messy but produces exquisite results. I'll be using both fluid acrylics and watercolors there, teaching my own batik process which I call Tape Batik. It looks like a beautiful, rural area of France and we're guaranteed wonderful dining and lodging as well!

Congratulations! But then its no surprise -- your paintings are so gorgeous and cutting edge --thanks so much for sharing as generously as you do. wish you a wonderful 2012 :)

Studio at the Farm said...

A most hearty congradulations to you, Sandy!! And I wish you a most wonderful 2012!

Fabulous Sandy, it looks great, congratulations and heres to a wonderful 2012!

Sandy, Sandyʚ(ˆ◡ˆ)ɞ !! What wonderful news!! I'm excited and so happy for you! Congrats! The article and YOU look very nice. Of course, your printed paintigs are fabulous. What a joy! Hey, you're in the world famous watercolourists. Cool!! But I'd say, you deserve it and your work is wonderful, our humble Sandyʚ(ˆ◡ˆ)ɞ !
BTW, I use Google translation web.
Anyway, tons of congrats!!
Best wishes,Sadami

Bravo, Sandy! That is so exciting and well deserved. Wishing you lots of success with your France workshop too.

Oh Sandy - I am so happy for you! Congratulations. I can't wait to see the magazine. Not only are you in good company but the other artists featured in the article are in good company with you!! What a way to start 2012 - Happy 2012!!

congratulations on this well-deserved honor, Sandy! what a great way to start 2012!

I haven't seen the magazine yet, but I saw a pic of the cover and was so revved up to see your name! Great selection of paintings to highlight your unique techniques. I hope you'll be featured more and more, people should know what a source of inspiration and information you are. And the same issue as Amanda...gotta get it!

Great work Sandy. I'm glad I peeked in after a long time. I also really liked "Irish Eyes" from September - though I think your first version was more "emotional" (or something)than the changed version - both were excellent, of course. I need to get down there and learn from you (or maybe Nick again) soon!
Mike D.

Sandy! I felt so lucky to come across you in the blogsphere! When I just started painting watercolor, I was attending Purdue and studied with Rena Brower in Lafayette, IN, and I saw your work in (I think) the Brown County Art Club or Zionsville (maybe the Hoosier Salon?), and I loved it!!! I did not get the chance to take a workshop from you then, before getting a job and moving to California, but I definitely want to take one of your Batik or Yupo workshops in the near future... I will drop back often to see what you are posting here. It's so great that in blogsphere we just keep on (re)meeting great people when we least expected...