IMPRINT ON MY HEART

Check out http://www.youtube.com/watch?v=nnj_MBfSZKs if you want to travel through the years that Andrew Wyeth painted. The Speed Museum in Louisville had an awesome display about ten years ago of his family's work. The show was incredible, but Andrew's work was breathtakingly stunning. It left me speechless. I could have stayed there and let his artwork pour into my eyes forever. I could have crawled inside the paint and lived there. It was so beautiful and really overwhelmed my emotions big time.

Getting to see some of the Helga paintings was a huge highlight in my life, and I will never forget the impact his work had on me. The depth of emotion that he could paint with............. He sure left an imprint on my heart.

He told his granddaughter a few years ago that he no longer gave interviews..... since everything he had to say was hanging on walls. He was a master who truly knew how to convey emotion with expert technique and had paid his dues to get there. The world is forever richer because he was here.

UPDATE: My friend, Dawn, just sent another site with other Wyeths on it well worth seeing at http://web.me.com/grainne2/Art_Appreciation/Art_Appreciation.html . Some are watercolor and some egg tempera.
Posted by Sandy Maudlin at 10:43 PM 4 comments: 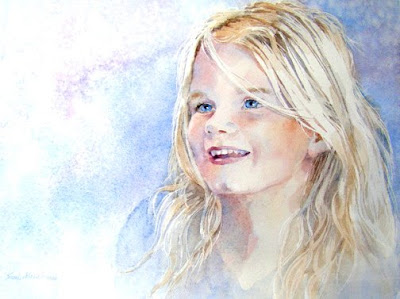 Portraits of children, especially younger ones, are very challenging to do in watercolor, and the challenge is even greater when the child is someone the artist knows and loves. Shown here are the five stages this painting went through this week, with the finished one posted first.

This little lady (my youngest niece) is very fair skinned with nearly white, silky blond hair.
As you can see in the next three photos, the hair was miskited carefully before painting began. The darker grayish areas are Pebeo Drawing Gum miskit, which will protect the white paper from paint and will be removed later. 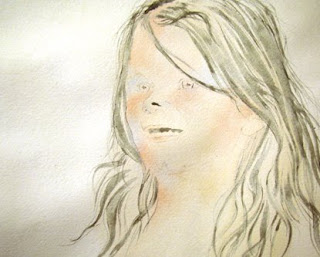 After carefully completing the sketch, I applied the miskit with a thin rigger brush and allowed it dry. Next, the whole page was gently sprayed with clean water. Pale, warm colors were added to most of the face with a little blue touched in at the temple, forehead, eye, and cheek areas. The colors spread beyond the face in some areas since the whole paper was wet.
The lighted middle of the face was kept very, very pale with just a slight hint of color. Because the paper was wet, there was no attempt to 'form or shade' any shapes yet or to try to create any necessary edges.
The dark spot on her nose is miskit, and the teeth have miskit on them too. The highlights in her eyes are also miskited. Raw Sienna, Quinacridone Burnt Orange and Quinacridone Magenta were the warms used, with Cerulean as the cool. 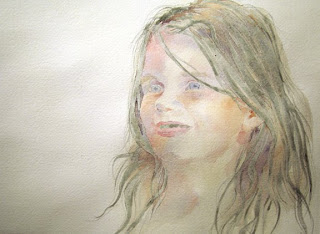 When the wash was completely dry, darker values were added in shadowed areas of the face - third photo posted her. Careful attention was paid to the edges of each darker shadowed area, adjusting each edge before it lost its shine. The nose begins to have more definition and the face begins to look a little more three dimensional at this point.
Because there are no eyes or mouth at this stage, portraits usually looks pretty ghoulish before they're painted in. Next, color was added to all the hair areas where medium and darker values were needed, using Cobalt Blue and Quinacridone Burnt Orange.
The background was washed in next on dry paper with a juicy amount of paint, using colors that had already been introduced in the painting. Care was taken to darken the background near the head so that the blond hair would be visible when the miskit was removed, but it was crucial to avoid making a dark silhouette all around the head. 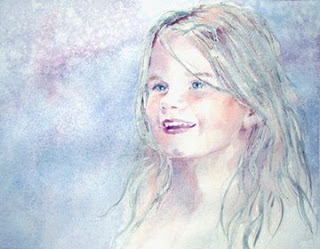 Before the miskit was to be removed, the facial features needed to be completed. The whites of the eyes were painted first, while the miskited highlights were still there, using pale Cobalt Blue. The top of the white eyeball area was painted a little darker to suggest a shadow under the upper eyelid.
The iris was done with Cerulean and a little Cobalt just as the Cobalt Blue in the whites of the eye was drying, and the highlighted side of the iris was a bit darker. The pupils, made up of Quin Burnt Orange and Cobalt Blue, were carefully centered in the iris while the paint was still just slightly moist. Lashes were nudged in on top and bottom, taking care to avoid outlining the eye totally with darks.
The brows were also nudged in to create a soft effect, using Quin Burnt Orange and Cobalt Blue. Once again, the edges of the brow were softened as needed so that they did not look pasted on. Also, the nostrils and ears were shaded a bit more, using darker, warm colors. The neck area also had to be darkened under the chin line with a little blue and warms.
The lips were a combination of Quin Coral and Magenta, as was the inside of the mouth. Once that area was done, the miskit could be removed from the teeth. Only a bit of pure white remained on the teeth after they were shaded with Cobalt and a little pink. The lines between the teeth are just hinted at.
Overall, more focus was given to the edges of shapes, how they disappeared or were soft or hard, than to which color to use. Specific attention was paid to just how dark one area needed to be compared to another. 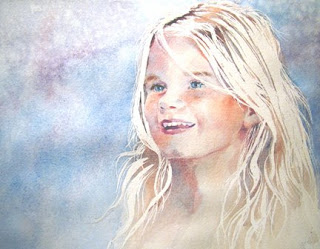 The miskit was taken off the rest of the painting at this point. In this photo, the harshness of the miskit is evident since no paint has been added to those areas yet in the hair. Color was added to most of the previously miskited hair, but for the hair to look blond, some of the hair had to stay the pure 'white' of the paper.
At last, final touches were made, darkening the corners of the mouth, repairing the chin area, and adding a suggestion of shoulders and shirt - refer to the finished portrait at the top of this post.
I was really pleased that this worked out as well as it did. Many times, a child's portrait takes many attempts to get it right. This painting is high key, very pale, compared to my natural way to paint, and being able to keep it light was satsifying too.
As usual, preparation and drawing time took about 75% of the time, with the actual painting time maybe a little over two hours. If someone asked me how long it took to paint this portrait, I'd say, "Three hours and forty years."
This is a Christmas gift for my brother and his wife, just a little late. Must get it in the mail this week. It sure was a delight to paint it for them. My niece's Christmas gift was a palette full of rich wonderful colors to paint with, and she did that VERY well.
"ALMOST SEVEN" Transparent Watercolor on 140#CP Arches COLLECTED
Posted by Sandy Maudlin at 12:59 AM 15 comments: