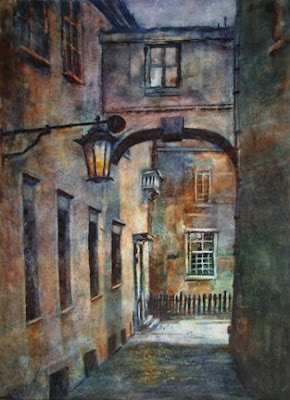 Check out the difference between this painting and the cooler version below. The 'blue' painting is the original, painted on gessoed watercolor paper several years ago.

This week, that blue finally got to me, so I dug out my mouth atomizer, diluted some transparent pyrrol orange fluid acrylic in water, then sprayed or actually 'misted' the blue painting to warm it up. Those ancient streets just looked wrong in cool colors.

A few small blue shapes were taped off before spraying, like the walk in front of the fence and parts of some windows. It would have been impossible to glaze paint over the surface because the friction from my paint brush would've easily lifted the existing watercolor paint right off of the gesso.

Once the orange dried, darks were added on the left hand side, and the sky area was darkened a lot to decrease the importance of its shape. A smattering of burnt orange was touched into the distant wall and more warms added to the lamp. 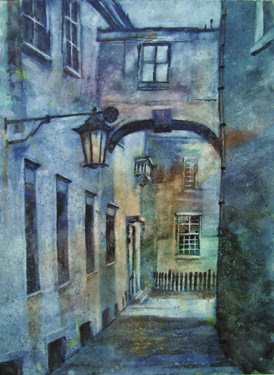 Some of the darker shapes were darkened even more, and the fence was extended over to the wall.

A new painting is in the works right now of the same subject, but the approach is very different this time. The temperature dominance WILL be warm, for sure. It'll be posted once it's completed.

Shapes capture more attention when they have some diagonal movement to them. This painting is about placing recognizable, diagonally oriented shapes together to create a patterned painting. It leans slightly toward a grid look or checkerboard composition.

Watercolors - five different colors - were washed over the paper initially, with many blossoms and textural effects encouraged to occcur in the wash. Then opaque gouache watercolor was added to enhance, define, and bring out the emphasis of the shapes. Stencils were also used for the lettering, roosters and chickens by using a sponge to lift out each shape from the paint through a piece of precut acetate stencil. 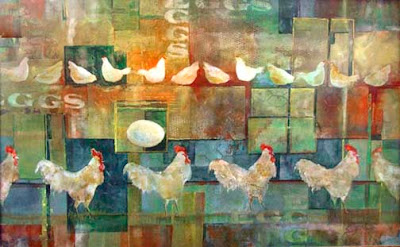 After lifting out the shapes, some areas in the stenciled shape were touched up again with paint. The rooster feathers were left as is, showing the underlying textures, with only the face and leg areas painted with detail.

Repetition was important but couldn't be over done. Temperature dominance was understated but still evident. The use of straight edges in the background against the fluid edges of the birds and egg helped add contrast, too. The painting needed some surprises and stronger contrasts of value to keep it interesting.

The egg has a lot more value changes within a small space than this blog shows. It did turn out really good with just a hint of warmth on the lower side of it. Click on the pix to see the textures along with the chicken wire --- which could have been done with a stencil, but was painted in.

The elements of design that were meant to be emphasized included shape, color, and texture. My natural inclination when painting is to put a very strong emphasis on value, but not this time. The whole process was like going on a mystery trip, since there was no initial plan to go by. Although most of my work is usually preplanned, I really get charged up by the challenges of finding my way in a painting like this.

Watercolor is often defined as a medium that incorporates the pigment with water to extend it onto the paper. That could include many kinds of paint like tempera paint/poster paint - from grade school - plus opaque watercolor made by mixing chalk with the pigments (gouache) to acrylics to water based inks to casein and egg tempera paint. Even watercolor pencils and crayons technically qualify as watercolor if water is added. But transparent watercolor is what the majority of people 'think' when they hear the word 'watercolor.'
This painting, done on the slick YUPO surface, includes 'regular' transparent watercolor with fluid acrylics over parts of it, with gouache added in thin layers plus water based inks drawn in last. It's a 'watercolor' technically, but PURISTS wouldn't consider it one. 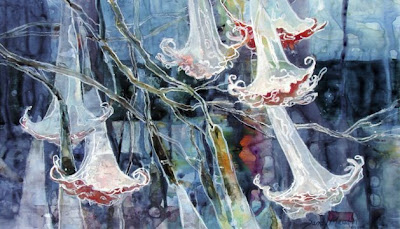 Very few watercolor societies limit the definition of 'watercolor' to mean just transparent watercolor (as PURISTS do.) There's certainly validity in having a group or show for only transparent watercolor paintings because the difficulty and challenge of painting with only transparent watercolor is great. It's good to compare apples with apples in a 'watercolor' show occasionally.
The majority of my paintings are only transparent watercolor, yet it is exhilarating to be able to select whatever medium it takes to produce art. Years ago, I let the restrictive interior "WATERCOLOR POLICE" keep me from trying out other water mediums. My goal was to increase my expertise with the transparent stuff, and I (unwisely) shunned all the other possibilities.
For so many watercolor artists, it can be a big deal to take that first step away from using ONLY transparent watercolor. It was a giant step for me several years ago. However, now, whatever it takes, whatever works - that's what art's about for me, and it certainly allows so much more freedom to be able to express and create.
This painting's title came about partially because of my 'fall' from transparent watercolor. It was one of the very first that I'd tried as I used gouache and acrylics and broke away from the limits I'd set on myself. It's several years old, and tomorrow's post will include another oldie from that time, using gouache, too.
"FALLEN ANGELS" Transparent Watercolor, Gouache, Acrylics, Ink on YUPO 13 x 8"
Posted by Sandy Maudlin at 12:01 AM 12 comments:

Yesterday's painting is a reversal of this painting, but this one includes more background area. The technique of literally pouring watercolor in layers over protected, painted shapes helped develop the glow in the tulips. 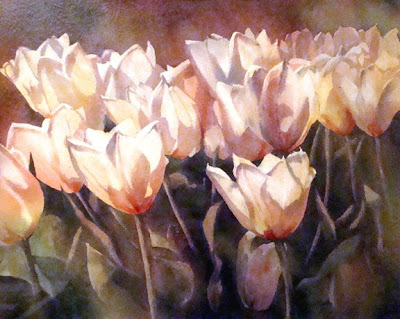 The mood in today's post seems livelier, maybe because of the warmer palette. Although the process takes a lot of planning and work, it's so worth it when all those miskit areas are removed to reveal the luminous colors.

A scrubber brush helped soften some edges in this painting, too, but no paint on a brush ever met with the paper. Both paintings are from the archives. 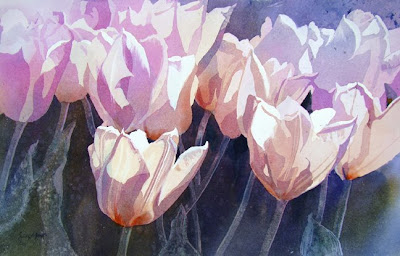 Only a few weeks until spring gets here - we hope... My daffodils are finally poking their leaves out of the soil, but there's no sign of the snow drops yet.

These tulips were painted with layers of miskit protecting the already painted shapes that weren't to get any darker. After each application of miskit dried, color was poured over the wet paper, then allowed to dry, too... more miskit, then more poured paint - with a total of seven layers of poured paint over seven different applications of miskit. No paint brush loaded with paint ever touched the paper, except for signing it.

The batiks and taping techniques on this blog were created with the same process, but with different materials to protect the lighter values. Instead of miskit, masking tape can be torn to cover shapes on the watercolor paper, or hot wax can be painted on washi papers to protect shapes before adding darker values of colors. Whatever's used to protect existing values helps keep the lighter values light and untouched, while the darker values are built up, usually resulting in fresher looking watercolors.

It's a great way to teach the importance of value changes to artists. Color does seem to get all the credit for a good painting, but VALUE really does do all the work - defining shapes, distance, forms, etc.
Watch for a post of another painting of the nearly same tulips tomorrow done with other colors, resulting in a completely different mood. Painting the same picture several times seems to bother some artists, but I enjoy the surprises and lessons that each painting brings, since they all have their own uniqueness. 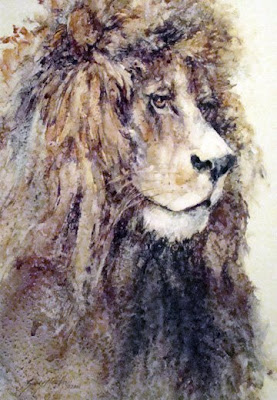 Yesterday's weather was a little 'lion like.' Our mom always told us that if March came in like a lion, she'd go out like a lamb, and I'm counting on it. Spring can't get here soon enough.

This lion actually lives at a zoo with a great view of Lake Michigan, and although he doesn't look too ferocious here, he can really, REALLY ROAR! He was created over eight years ago on YUPO paper, when I was just learning to control the paint on that slippery YUPO surface. Some of the darker detail has been painted with 'tip tapping' brush strokes, which I don't seem to use as much anymore.

The lion looks old and sad, and a little too human, maybe because of the long winters on the lake. Or perhaps he's really the lion in the Wizard of Oz?!?

He was a beautiful and majestic animal and did live with a lovely lioness in his large, serengeti-like confinement. The YUPO painting of her was posted a while ago. 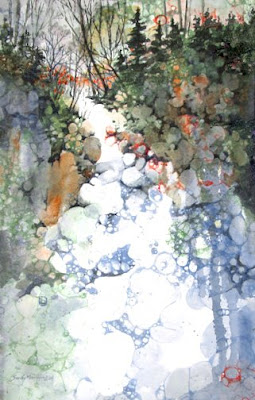 Freshly blown bubbles, (made up of 6 oz. water with 3 oz. Dawn Liquid and 2 oz. of fluid acrylics,) created a textured background for this watercolor. Three colors were used in separate containers, and the last two 'printing' of different colored bubbles took place while the original bubble print was still damp on the page. This allowed some areas of the color to mingle on the paper, creating subtle changes in the bubbles.

Once the bubbles/paint mix dried, it was time to develop some kind of painting. This one really suggested the free fall of water from the top of a steep slope, and since I'd recently read The Shack, beautiful Multnomah Falls near Portland, Oregon, came to mind.

A shape was cropped from the original printing to accomodate the composition. Then, trees were added and some areas darkened to enhance the composition and create movement in the painting. Finally, more burnt orange was painted across the top of the falls for a bit of drama.

If you haven't read it yet, check out The Shack. It started a little slow for me, but after a couple of chapters, there was no putting it down. Hope you like it, too.