This painting is from several years ago. It recently returned home from the gallery and challenged me to rework it. Since it was done with both watercolor and gouache, the challenge sounded like a good possibility. 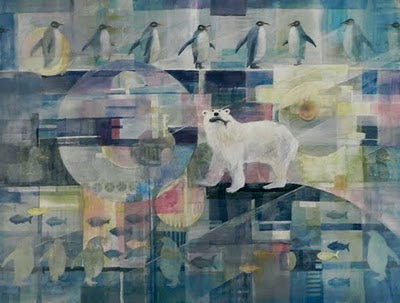 First the garish cool yellows were calmed down. That helped a little but not enough to suit me. Next shapes were quieted somewhat to what you see here.
Finally, after a lot of deliberation, cropping became an option, because the painting had no holding power as it was. The overall pattern of lights and darks was just too weak to keep my attention.
Often when a painting is shrunk down to a one inch size, the pattern of the lights and darks of the painting becomes very easy to read, since all the detail is too small to see. If there is an effective pattern of light and dark shapes, the painting will hold together at any size, which helps to keep the viewer's attention longer. You can see the difference of the major light and dark shapes here of the original painting and the cropped version. 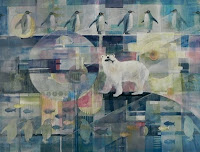 Below is the final cropped painting. Slicing off the busy shapes, even though I really liked them, helped the overall success of the painting. The new and narrower painting now 'lives' in southern Michigan. It found a happy owner on its first debut out the door. HURRAY!