Before Photoshop, the best way for me to combine parts of photos was with scissors and tape. This first photo had wonderful silhouettes of distant gondolas against sun kissed Venetian buildings. 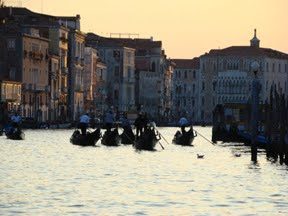 The second photo with the same lighting source pictures gondoliers up close, perfect for a center of interest in my painting. 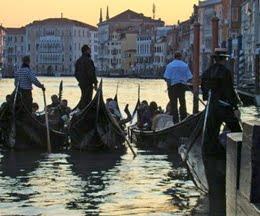 The skyline of both photos could have been more exciting, so one of the beautiful domed buildings from further down the Grand Canal was plopped into the background after it was flipped over to lend similar lighting. 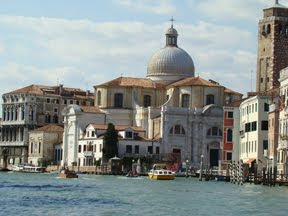 Some of the gondoliers were erased, and the balding head of the gondolier on the left was covered with one of the erased hats. The water line was adjusted to be at the horizontal phi, thereby dividing that length up to be the most pleasing division of space. The dome plus the pole of the gondolier on the left are on the vertical phi of the width of the paper. By the time I'd done all this on Photoshop, I was getting well acquainted with the subject matter, the shapes, the values, and the nuances of the edges of the different shapes. Plus, I was reliving the magic of that ride on that first evening in Venice. 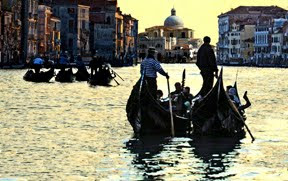 Last week's post showed the results of this same image, cropped in vertically, and painted as a batik, using hot wax and watercolor on rice paper. This week, my goal was to paint this same subject again on a full sheet of Arches and to make 'atmosphere' the most important part of the painting. Leaving out as much detail as possible was my focus. The only details would be in the shapes that really caught my eye in the first place.

With a loose sketch drawn freehand directly on the paper, I started with very fluid paint loaded in a large squirrel mop brush - not my normal brush to use. Thinking only warm and cool for colors, I began the sky area and added plenty of water to let it flow on its own. The paper was positioned on an incline as well as turned sideways, then upside down, depending on what I wanted the paint to do. There were a couple of small areas that were kept dry so that they would remain untouched white - on the dome and on the hat of the gondolier on the left side.

My brush was moving continuously as the shapes of the buildings were placed in on the damp paper. I squinted a lot to help eliminate details, and my reference photos were not in sight. The only thing I had for reference was a thumbnail pencil sketch of the values that were important to include.

The edges of the buildings fuzzed a lot since I was painting on damp paper, but a soft, indistinct background was what I was after. Once the shapes were placed above the water line, the water line was darkened, and the distant shapes of the gondolas were added using the same big brush. I actually painted the tops of the distant gondolas first, making sure to leave those somewhat triangular white shapes between the water line and gondolas. The bottom of those gondolas were brushed in quickly with a sure stroke rather than a tentative, careful one.

The two bigger gondolas and their passengers were next, and the water areas were also painted along with them. Care was taken to avoid damp areas where sharp edges were desired. There was an 'oops' moment on the left side of the left gondola when the paint met some dampened paper. Wednesday's class was watching and insisted that I not blot the 'oops.' I want to thank them, since that's now one of my favorite parts of the painting. That soft, unexpected edge seems to add a lot to the atmosphere I was after.

Most of the water areas went really well, as long as my brush stroke was quick and sure. Later when the painting was dry, I sprayed off the strength of the reflections under the left gondola where I'd used a more timid stroke. I did change to a 00 rigger brush to make the line of the oar for the left gondolier. I used that brush to sign my name, too.

Before I could go back and put in more detail, the class insisted I stop, and this next photo shows the painting at that point. I lived with it for several hours but felt it needed just a bit more definition in some of the buildings. It seemed to me that there was too big of a gap between the detail in the foreground and the quietness of the background. The painting also had soft, pale values and stronger, darker values, but very few mid tones. The second photo below shows the finished painting. 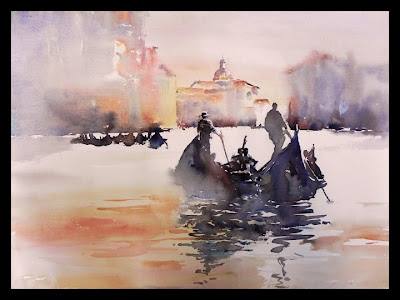 Stage One above - about 2 hours of non stop painting, after many hours of preparation..... I was really exhausted when this part was done. Painting loose and leaving out detail is contrary to how I normally paint. I was way out of my comfort zone, but I was loving the challenge, too.

Stage Two below- the finished painting with hints of detail in the buildings, a bit more dark on the dome, as well as the water and shoreline softened in a few places. 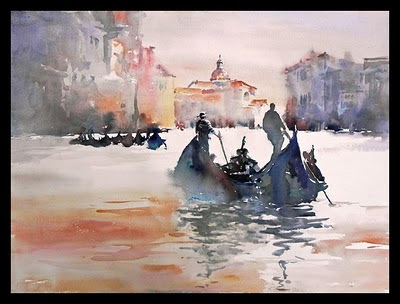 This style of watercolor painting is what drew me to watercolor in the first place and sparked my passion for it. Though I've explored many different techniques, I'm always enthralled with the beauty that watercolor has when the paint is allowed to behave freely with the water. Nita Engle calls it 'letting your painting paint itself.' I was sure tired after those two hours of letting that happen!