Some paintings don't work out at all, and some fall just short enough that they torment me. One of those was a painting of two huge pigeons, a big painting, 27" by 43", cut from a roll of hot pressed Arches paper. The original was posted last fall, but now it's posted again so you can see what a difference one wash of color can make to a painting.
First, the pure whites on the birds were misketed to protect them from any more paint. Some of the blues were also miskited for the same reason. Then, the entire surface of the paper was sprayed, which didn't harm the fluid acrylics in any way. Using a large brush to glaze over the whole painting, I washed on Transparent Pyrrol Orange, a beautiful fluid acrylic color from Golden. DaVinci may carry it too.
Popcorn salt was sprinkled over the damp, glistening glaze in a few areas to allow the colors underneath to surface. After the orange glaze dried, some more darks were also added in the background to help settle it down.
I'm much happier with it now, and it'll be one to take this weekend to Indianapolis for my demo at the Watercolor Society of Indiana meeting. If you have time, let me know if you like the change. The newly glazed one is the first one posted. Thanks. 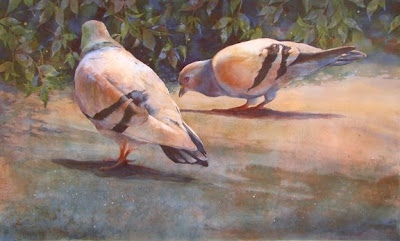 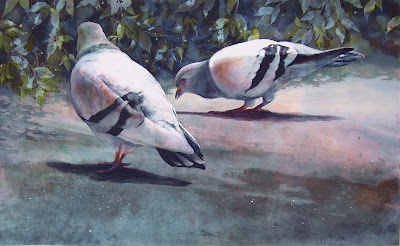 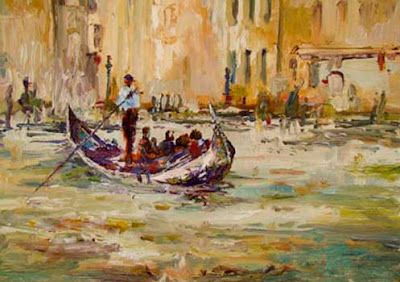 OR COULD IT BE ---MAYBE the snow and ice came along to cancel classes because the oils had invaded my WATERMEDIA studio? Punishment? It was all Carl's idea to have an oil demo, so maybe we can just blame all that winter weather on him! (Grin.)

Again, the idea was to capture my emotional response about the scene as quickly as possible with few details. A week later, while it was still snowing, I worked on the painting again, trying to straighten up the gondola, add in some more windows, and really messed it up. The sense of immediacy disappeared. It's in the dump now, having joined the piles of wasted watercolors that went before it.

The oil mess is cleaned up. The lids are on tight, and the tubes packed away, paper palettes pitched, brushes painstakingly cleaned ..... until next time. The snow's all melted, finally. Back to my fluid acrylics and watercolors. 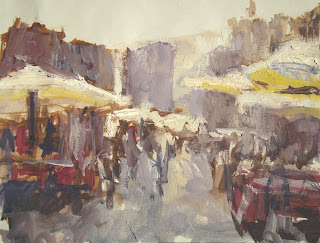 This first small oil was done on half a sheet of typing paper, which will eventually disintegrate as the oil eats into it. One of the reasons for using a temporary surface to paint on is to take away the importance of a finished product and focus instead on capturing the essence of the scene and my emotional connection to it.

The second painting is a little bigger - about 12 x 9" - and on canvas. A third, very large painting was developed from these two onto a sheet of YUPO paper. It's the third photo posted, although the colors don't quite do it justice. 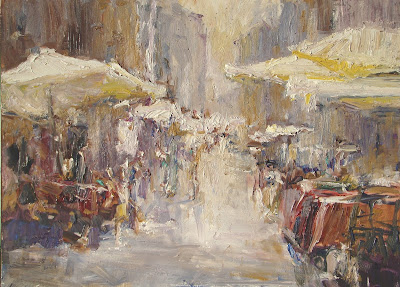 The YUPO painting was created using all transparent watercolor, and my hope was to establish a very impressionistic, oil-like painting with the watercolor. That slick YUPO surface is so versatile. I LOVE IT!

This Sunday, I'll be doing a YUPO demo for the Watercolor Society of Indiana meeting in Indianapolis. Tomorrow's agenda includes deciding what to paint. It will be fun no matter what. 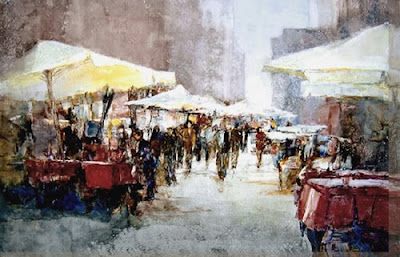 The first oil on paper painting above has not been posted before, but the last two were posted much earlier in my blogging. I wanted to include them here again with the previous posts of oil-studies-soon-to-be-watercolors.

One of my friends mentioned that he really liked my paintings where the people had no faces. He's an strong introvert and loves art, and I appreciated his observation of the impressionistic look.