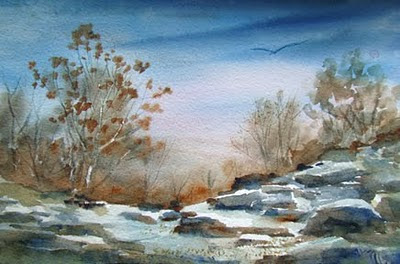 Over the holidays, one of my sister-in-laws took on the challenge of painting with watercolor, and she did very well. Hopefully, she now has her painting hanging in her office in Colorado.

This first painting shows the little demo I did to help her get started, and it's quite small, maybe 5x7." The second painting is also mine, painted more than a dozen years ago and is about 28x40." Both were painted without any visual references, but what a difference there is in the two. 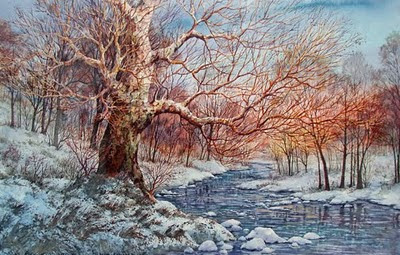 The paintings were done years apart.
They are vastly different in size.
Each was painted for a totally different purpose.
The smaller one took less than 20 minutes to create.
The larger one took over 20 hours.
Different color choices are evident - lots of Indanthrone in the smaller one and too much French Ultramarine in the big one.
The looser style of painting contrasts sharply with the tight, controlled look.
The smaller painting, even though it's fairly simple, shows a brush which has had more experience.

It's not in me anymore to create a painting like the big sycamore and creek. But if I did paint it now, it would be simplified, quieter, less grassy stuff and fewer branches, with more emphasis on what was important to say, etc. If it were painted again, it would have a totally different outcome.

Here's the biggest difference. The sycamore painting was about accurate recording of all the THINGS shown in the painting, while the quick study painting was about paint application, value differences, and shape making. Recording things on paper just doesn't interest me as much anymore. Hope that makes sense.

We talked in classes this week about developing our own style of painting. Although there's a vast difference in time, size, colors, style, etc, of these two paintings, is it likely that the same artist painted both of them?

Compare painting styles to handwriting. Each of us has a distinct signature that we sign our name with. My stance is that each artist also has a distinct style within that naturally shows up in every painting. The longer we paint, the more obvious the style is. We don't have to develop it because it's already there, ready to show up when we learn how to paint.

That unique style can be camouflaged at times, like when a student artist is learning the style of a particular artist or trying new techniques. But even then, the way the brush hits the paper is different for everyone, and that unique 'painting' signature is evident.

One last comment - - - the big sycamore was painted as a graduation gift for our son, who requested a painting of a creek, snow and sycamore. He likes realism so that was the big focus when it was painted. At least that's my excuse, and I'm sticking to it! Have a great weekend.
Posted by Sandy Maudlin at 11:39 AM 15 comments: 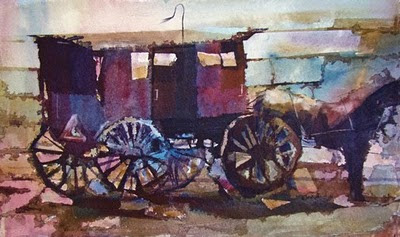 In the late 80's this Amish buggy was 'parked' outside a small grocery in Greentown, Indiana and looked like good painting material to me. However my desire was to paint it with more of a contemporary flair to contrast with the old fashioned look of the buggy.
Having tried one or two 'tape paintings' (that's what I called this process,) I decided that 'taping' the painting would be the way to express what I envisioned. Since this was one of my first 'tapings,' I had virtually no plan or even a drawing, just masking tape, paint and a photo to inspire me. The batik-like look that resulted from this painting hooked me for good. I knew then that all the work of tearing pieces of tape to fit each shape would be worth it. The resulting textures were so unique and exciting.
Later this buggy painting was entered in a local show and was awarded second place. The judge, Jerry Smith, WSI, asked me why I left off the horse's head. He may have wondered if it had meaningful significance. When I told him I ran out of room because I hadn't planned ahead, he grinned and shook his head. 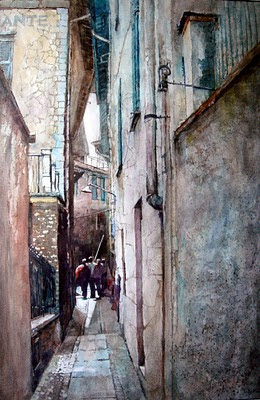 This taped painting of a village in Italy was one of my favorite ones to do. Last week's post, also about taped paintings, has a similar painting. Once I had completed this one, I realized that zooming in on the people would make a great painting without all the buildings.
Because the watercolor paint seeps under the tape in an irregular way, wonderful and unpredictable textures result. Over the years of experimenting, I've discovered which brands of tape 'leak' the best - or worst. Still, it's always a surprise when all the painting part is completed and the masking tape has to be removed. Often adjustments must be made once the painting is revealed. 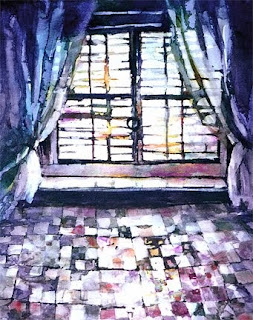 My previous blog last week included a taped painting of this same shuttered window and quilt. Check out the difference in colors changes and how that affects the mood of each painting.
It's impossible to 'copy' a taped picture because of the way the masking tape tears and the way the paint seeps under it. What a surprise it is to remove the many pieces of tape to find glorious color combinations, too. 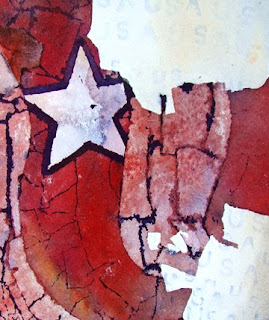 This painting was an experiment done just for fun, with no plan. It's called "Throwing in the Towel," and is quite small, only about 8 x11" Only four layers of tape were used, as compared with my normal six or seven layers. There's also a little stamping added in the whitest areas. 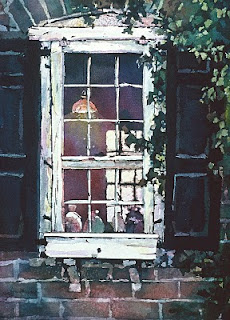 The previous post also had a painting of this very same window with tulips under the window. The three taped paintings shown on this post each have their own 'flavor.' 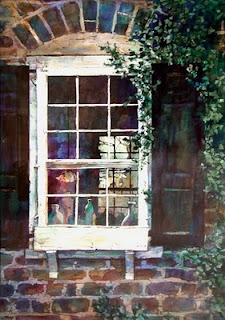 Recently, someone posted an opinion about artists who repeat the same paintings. They believed that repeating a painting was "self plagiarism". Tell that to Monet with his haystacks! 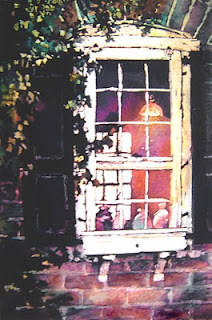 If I love a photo I've taken, if I'm inspired by it time and again, I WILL paint it more than once... because it's still brewing inside of me ....don't know how else to explain it. Some things just never stop intriguing me, and I must paint them again and again, using different approaches each time. 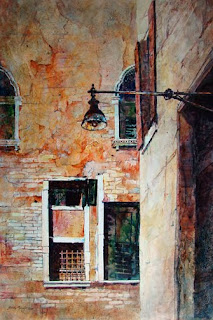 The vast array of textures in Italy are perfect for this taping technique. These old buildings began as a taped painting on YUPO using FLUID ACRYLICS, applied with a watercolor approach to be transparent.
This was the first taped painting I'd tried on YUPO. Regular watercolor lifts off of YUPO, so it wouldn't work for the taping process.
Thank goodness for the flexibility of Fluid Acrylics. Only three layers were taped on this, then the rest of the work was done with a brush.

Both gouache and transparent watercolor were used for this taped painting, which was begun with absolutely no plan. Once the tape was removed, after seven layers of taping and painting, (see below)the painting needed a lot more definition. 'Finding' a direction for the painting was a challenge until Barb mentioned that she could imagine a woman with a fancy hat on, something like a Kentucky Derby hat.

The next photo shows how the painting looked after the tape was removed. The last photo shows the work in progress as I slowly 'found' her with her hat in all the tape design. Almost all my taped paintings begin with a specific plan, but this one didn't. It was lot of fun to discover what the painting could be.

There's a workshop scheduled in April this year in Indianapolis where I'll be teaching this unique process. You can check out the 'batik-look-alike' taping workshop on my side bar to find out all the details. Hope to see you there.
Posted by Sandy Maudlin at 11:15 PM 10 comments: