YUPO LEAP TOWARD THE CHALLENGE 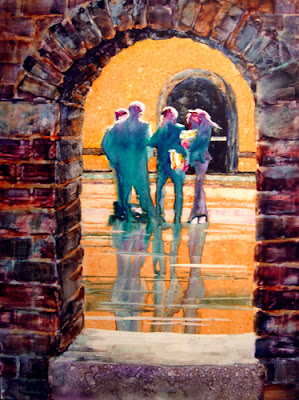 It's LEAP YEAR, and today's February 29th. The artists in my classes have 'leaped' at the chance to grow beyond their comfort zones by taking Myrna Wachnov's first artist challenge of the year.

On her blog in January, she suggested that we select a reference photo to be painted several times. We were to make each painting have dominance of one of the seven elements of design. Each of the seven paintings also had to have a different unifying color throughout every part of the painting, and each had to be created with its own specific compositional design, selected at random ahead of time.

These are my final three paintings of the seven. My other four challenge paintings plus the reference photo are posted at the end of this post, as well as in late January and early February posts on this blog.

The top painting, my Week 7 painting, was based on a SHAPE-IN-SHAPE composition with SHAPE as the dominant element of the painting. It was great that I drew those two together, because it made things a little simplier to figure out.

To make this a shape-in-shape, I liked the idea of taking the people off of the street they were on and placing them in the train station - or wherever you think this might be. The window happened by chance. I'd designed an open archway, but closed it up, making the shape-in-shape composition possibly stronger. This was done with transparent watercolor on YUPO and is about 11 x 15". 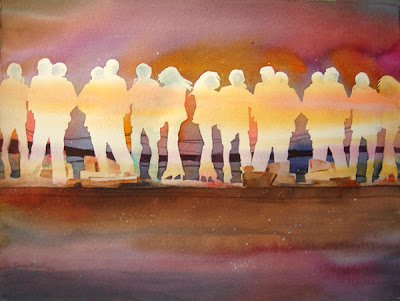 (Quinacridone Burnt Orange was the unifying color, but I forgot to put it in the clothes on the people :-(

For Week 6, the element I drew to be dominant was DIRECTION, and the composition I had to use was HORIZONTAL. These two also went together nicely, but the problem I faced was how to make vertical people shapes have a horizontal dominance.

Remember those paper dolls some of us cut out when we were kids? That gave me the idea to 'stretch' out the line of people so they looked like there were lots of them. I still used my photo reference, but I duplicated the people, reversing them, too.

I miskited the figures to keep them white. Applying the strokes of fluid acrylics horizontally and letting it flow by tipping the paper sideways helped create a stronger directional dominance. Adding the small, thin lines increased the dominance, too. I really liked the little figures that showed up in the negative spaces between the people shapes.

After removing the miskit, I flowed more color horizontally across the people shapes, then added a few details to specific areas on their bodies and around their feet. This was done on Arches 140# CP with Fluid Acrylics and some Transparent Watercolor and is also 11 x 15." (Unifying color was Quinacridone Coral.)

Week 5 was a CHALLENGE for sure. The element to make dominant was COLOR, so ... "piece of cake," I thought. And then I drew STAGGERED for the composition. Ugh. I cut up all the people and staggered them into a design that I thought would work and began painting, thinking 'color, color, color!' 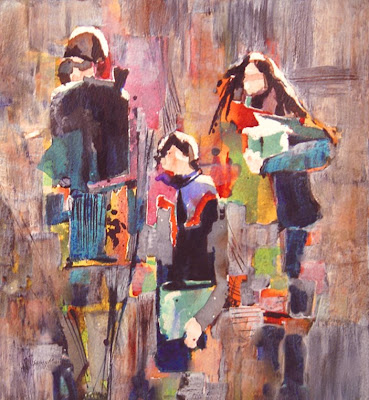 I used color - everywhere - and in pure doses except for the unifying color I'd added in, which was Hansa Yellow. I ended up with a "It'll hurt your eyes" ugly painting. Too much garish yellow and oranges, too many colors everywhere. So I started knocking them down, neutralizing them, graying the intensity of most areas.

After lots of critique considerations and many corrections, this is the result. I'm not sure it comes off as staggered, but I do think that COLOR gets attention in those pure spots that are left. It's growing on me, I guess. Let me know what you think. It was my worst one but may end up being my favorite one. Weird.

This is done on Arches 140#CP with Fluid Arylics, Transparent Watercolor, Caran D'Ache Crayons, and Conte Crayons and is smaller since I cropped a lot of it off... probably about 9 x 12."

Samples of my previous challenge paintings are below - 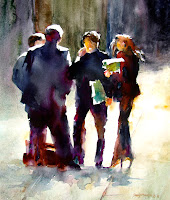 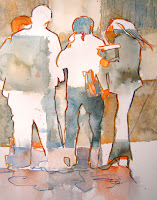 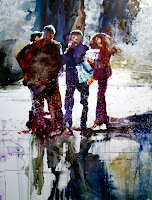 - My photo reference for the challenge paintings, taken in London, England in '06.

Painting from the same photo seven times and being challenged to make each painting specifically different was invigorating. I learned a lot and stretched beyond my normal painting habits.

Most of my students are also working on their own seven challenge paintings, and you can see a couple of them by checking their blogs - Chris Campbell's floral paintings and Rhonda Carpenters' challenge paintings of two different themes, the most recent some old time pottery. See the side bars on the right hand side of my blog to go to their sites.

Some of the works I've seen in class simply astound me. Artists are SO creative! And we can thank Myrna for the challenge she gave us ... or maybe some would blame her for the misery it is to push beyond our comfort zones. Surely not.

Happy Birthday to David! February 29th! ...... the only person I've ever met with this birthday.

Sandy,
I am truly in awe at what you have done with Myrna's challenge. The one you think is the worst may be one fo your favorites because of how far you brought it. I love the horizontal one, especially after you pointed out the little people in the negative spaces. And I do like your new one with the old stone arch.
In class I would love to see what Caran d'Arches Crayons are.
Thanks for being such an incredible inspiration to all of us. ~Bonnie

Isn't it interesting what we can do when challenged?! What a great bunch of variations you created! I loved this challenge too...it really helped me learn to think first.

Hi Sandy,
These are such fun. Great job, as usual. The 3 staggered figures would be a great start for a George James workshop painting! I like what you have done with it but the next variation could be Jamesish. Check out Mike Bailey's post yesterday. He is my inspiration for sticking with the same image.

Thank you so much for commenting on this post. It was so much fun to be challenged - and it's so good to be able to share with others what we create.

I just took Myrna's workshop on variations --I wish I had seen this post before :) I absolutely love all your pieces and the explanations and descriptions help me again since I went thru all the exercises compressed into five days !!!!